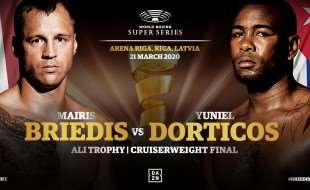 Tickets flying for Briedis-Dorticos! Only 20% left in low-price category

Low-price category tickets for the WBSS Cruiserweight Ali Trophy final in Riga on March 21 are almost entirely sold out already after only three days on general sale.

“Tickets are flying fast,” said Kalle Sauerland, Chief Boxing Officer of the WBSS. “We’ve just been four days in Riga to kick-off the event and you could really feel the boxing buzz. Not only for the local hero Briedis but certainly also for Dorticos who have had hundreds of fans around town taking a photo with him. We can’t wait to get back to Riga for our fight week activities.

“This event is going to be sold-out, and it is going second to none with the eyes of the planet watching Riga being turned into the Las Vegas of Europe.”

Tickets for the incredible Mairis Briedis vs Yuniel Dorticos Ali Trophy showdown are on sale from €29 via bilesuserviss.lv and WorldBoxingSuperSeries.com.

The final will be broadcast live on DAZN in the U.S. Fans can visit DAZN.com or download the DAZN app to their preferred connected device.

The road to Riga:
Mairis Briedis and Yuniel Dorticos took parallel routes to the cruiserweight final of the WBSS. Briedis beat Noel Mikaelian on points in his quarter-final in Chicago and stopped Krzysztof Glowacki in Riga via TKO in the third round of a dramatic semi-final. Dorticos claimed a points victory over Mateusz Masternak in Chicago and a 10th round knockout of Andrew Tabiti in Riga – a KO that earned the ‘KO Doctor’ the ‘Knockout of the Year’ prize across multiple media.